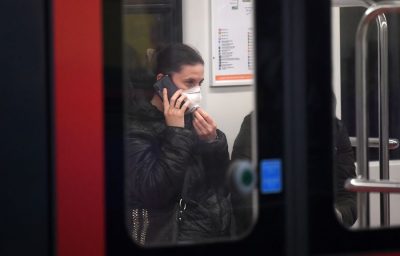 As the distraction of BLM/Antifa riots and the coronavirus have consumed much attention and energy, the social engineering agenda of the World Economic Forum’s Great Reset has taken a giant step forward in establishing the mandatory face mask as a symbol of submission to their dehumanizing agenda.  Beyond Orwellian, the face mask is being used as a guise to re shape our perception of reality in acceptance of a scientific dictatorship as an integral part of a looming totalitarian globalist agenda.

In a July 12th Facebook page, Polis stated that “The emerging scientific data is clear” that wearing a mask protects others and reduces the risk of contracting Coronavirus.  Polis then referred to those resistant to a face mask as a “selfish bastard.”

If the Governor is truly at a loss as to how masking or other lockdown requirements became a political football, he has not been paying attention.  Consider the following: on March 20th, California became the first state in the country to order a Lockdown which was quickly followed by other States with Democratic Governors. To date, a majority of those Governors (21 out of 24) have all approved the mandatory wearing of face masks, albeit without applying any science.  It is the arbitrary ‘shutdown’ of business as well as onerous personal requirements (such as social distancing) with a State adopting  oppressive dictatorial behavior as if they have the right to make personal decisions about any one life.

If CV is merely a variation of an infectious virus, sunshine and warm weather should have already limited its impact; reducing its spread and exposure.  Instead, as Red States attempt to re open  (ie Texas and Florida), sudden intense  CV ‘hot spots’ flare which forces the State to delay and increase its shut down requirements.  Given an advanced radio frequency weapon ability, those ‘hot spots’ may have been generated by 5G at the millimeter level on the electro magnetic Spectrum.

Lockdowns: Essential to the Master Plan

If, in fact, science is not the prime reason for mandatory face masks; that is, if face masks do not provide safety from contagion, then why mandate face masks at all?  What other purpose does a face mask have but to protect the wearer or to inhibit spreading  the virus?  Without evidence that masks have positively reduced exposures and thereby fatalities, then the true purpose of the mandate becomes a more nefarious political and partisan gesture of psychological manipulation and control.

Renowned nutritionist Dr. Joseph Mercola has recently reversed his earlier support of face masks and interviewed Dr. Denis Rancourt, PhD who examined the issue on behalf of the Ontario Civil Liberties Association.  Rancourt conducted extensive research with an emphasis on masks and did a thorough review of science literature concentrating on whether any evidence exists that masks can reduce infection risk of viral respiratory disease.  As a result of examining many controlled trials with verified outcomes,  he found no statistical advantage to wearing a mask or not wearing a mask and that masks do no inhibit viral spread.

Rancourt asserted that “there is no evidence that masks are of any utility for preventing infection by either stopping the aerosol particles from coming out, or from going in. You’re not helping the people around you by wearing a mask, and you’re not helping yourself avoid the disease by wearing a mask. In addition, Rancourt explained that “Infectious viral respiratory diseases primarily spread via very fine aerosol particles that are in suspension in the air.  Any mask that allows you to breathe therefore allows for transmission of aerosolized viruses.”

“we’re in a state right now where the society is very gradually evolving towards totalitarianism.  As soon as you agree with an irrational order, an irrational command that is not science-based, then you are doing nothing to bring back society towards the free and democratic society that we should have.”

While the ACLU remains absent, OCLA (Ontario Civil Liberties Association) recommends Civil Disobedience against Mandatory Mask Laws.  If you are not comfortable with civil disobedience  and  your local food markets all require a face mask, don’t deny yourself the healthy food you and your family need – but DO find ways to  register your dissent against being forced to wear a face mask. Write a Letter to the Editor and contact all of your elected political leaders.  Be sure they understand  your objections that you will not comply with their unconstitutional and immoral behavior.

Featured image: A woman wearing a face mask is seen in the subway in Milan, Italy, March 2, 2020. (Photo by Daniele Mascolo/Xinhua)

Become a Member of Global Research