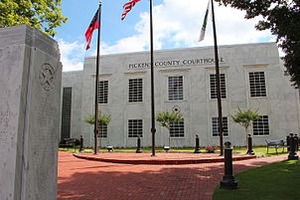 A North Georgia newspaper publisher was indicted on a felony charge and jailed overnight last week – for filing an open-records request.

Fannin Focus publisher Mark Thomason, along with his attorney Russell Stookey, were arrested on Friday and charged with attempted identity fraud and identity fraud. Thomason was also accused of making a false statement in his records request.

Thomason’s relentless pursuit of public records relating to the local Superior Court has incensed the court’s chief judge, Brenda Weaver, who also chairs the state Judicial Qualifications Commission. Weaver took the matter to the district attorney, who obtained the indictments.

Thomason was charged June 24 with making a false statement in an open-records request in which he asked for copies of checks “cashed illegally.” Thomason and Stookey were also charged with identity fraud and attempted identity fraud because they did not get Weaver’s approval before sending subpoenas to banks where Weaver and another judge maintained accounts for office expenses. Weaver suggested that Thomason may have been trying to steal banking information on the checks.

But Thomason said he was “doing his job” when he asked for records.

“I was astounded, in disbelief that there were even any charges to be had,” said Thomason, 37, who grew up in Fannin County. “I take this as a punch at journalists across the nation that if we continue to do our jobs correctly, then we have to live in fear of being imprisoned.”

Thomason and Stookey are out on $10,000 bond and have a long list of things they cannot do or things they must do to avoid going to jail until their trials. On Thursday, for example, Thomason reported to a pretrial center and was told that he may have to submit to a random drug test – a condition of the bond on which he was released from jail last Saturday.

Alison Sosebee, district attorney in the three counties in the Appalachian Judicial Circuit, and Judge Weaver say the charges are justified. Weaver said she resented Thomason’s attacks on her character in his weekly newspaper and in conversations with her constituents.

“I don’t react well when my honesty is questioned,” Weaver said.

She said others in the community were using Thomason to get at her. “It’s clear this is a personal vendetta against me,” she said. “I don’t know how else to explain that.”

But legal experts expressed dismay at the punitive use of the Open Records Act.

Another expert said the charges against attorney Russell Stookey may also be unfounded. Robert Rubin, president of the Georgia Association of Criminal Defense Lawyers, said it was wrong for the grand jury to indict a lawyer who “is using the legitimate court process for a subpoena to get records relevant for his case.” The dispute grows out of a March 2015 incident involving another judge who is no longer on the bench. Judge Roger Bradley was presiding over several cases and asked the name of the next defendant. The assistant district attorney announced next up was “(Racial slur) Ray.” Bradley, who resigned earlier this year, repeated the slur and also talked about another man whose street name started with the same slur.

Thomason asked for the transcript after he was told courtroom deputies also used the slur.

But the transcript only noted that Bradley and the assistant district attorney used the word.

According to Thomason, the court reporter told him that it was “off the record” when others in the courtroom spoke the word so it would not be recorded in the transcript. He asked to listen to the audio recording, but his request was rejected.

In an article Thomason quoted the court reporter as saying the slur was not taken down each time it was used.

And then Thomason asked Stookey to file paperwork with the court to force the the stenographer, Rhonda Stubblefield, to release the recording.

Stubblefield responded with a $1.6 million counterclaim against Thomason, accusing him of defaming her in stories that said the transcript she produced may not be accurate. Two months later a visiting judge closed Thomason’s case, concluding that Thomason had not produced evidence the transcript was inaccurate.

Last April, Stubblefield dropped her counterclaim because, her lawyer wrote, it was unlikely Thomason could pay the award if she won.

The next month, however, Stubblefield filed paper work to recoup attorney’s fees even though last last year she was cut a check for almost $16,000 from then-Judge Bradley’s operating account.

“She was being accused of all this stuff. She was very distressed. She had done absolutely nothing wrong,” Weaver said of the judges’ decision to use court money to cover Stubblefield’s legal expenses. “She was tormented all these months and then had to pay attorneys’ fees. And the only reason she was sued was she was doing what the court policy was.”

Stubblefield’s lawyer, Herman Clark, said in court Stubblefield was asking for the money from Thomason or his attorney so she could replace the funds taken out of the court bank account. Clark said it was unfair to expect taxpayers to pick up the cost.

To fight Stubblefield’s claim for legal fees, Stookey filed subpoenas for copies of certain checks so he could show her attorneys had already been paid. One of those two accounts listed in a subpoena had Weaver’s name on it as well as the Appalachian Judicial Circuit.

Weaver said the identify fraud allegations came out of her concern that Thomason would use the banking information on those checks for himself.

“I have absolutely no interest in further misappropriating any government monies,” Thomason said. “My sole goal was to show that legal fees were paid from a publicly funded account.”