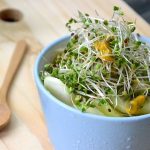 (NaturalHealth365)  Can sulforaphane – a substance found in broccoli sprouts and other cruciferous vegetables – have a positive effect on children with autism?  The quick answer is ‘yes!’

Today, we highlight the research out of Johns Hopkins University School of Medicine – which is quite compelling.

Autism cases are growing at an alarming rate – with many experts observing that this health issue affects 1 in 45 children.  The rapid rise in children affected by autism has been largely attributed to the ever-growing vaccine schedule and its delivery of too many neurotoxins with every vaccination.

But, even if your child has been vaccinated, there is hope.  Researchers reveal how the consumption of more sulforaphane can help children to improve their social skills, verbal communication and overall behavior.

The research was unveiled in the Proceedings of the National Academy of Sciences.  Apparently, sulforaphane stimulates and upregulates the genes that protect cells from the internal factors involved in autism spectrum disorder. These factors include inflammation, oxidative stress and DNA damage.

Naturally, these results are extremely exciting, as they could indicate the possibility of helping kids with autism.  By addressing the underlying cellular problems of the disease, autism symptoms could potentially be reduced or even eliminated.

For the study, 40 autistic males age 13 to 27 were given either sulforaphane or a placebo for 18 weeks.  Social responsiveness, communication skills and behavior were assessed both before and after the study period and at the four and ten week markers.

When cellular protective mechanisms are activated, autism symptoms fade away

After four weeks, behavior had improved noticeably in the sulforaphane group.

By 18 weeks, 46 percent of those taking sulforaphane showed progress in their ability to interact socially, 42 percent had improved in verbal communication, and 54 percent exhibited less aberrant behavior.  But, it’s important to note that the improvements diminished after the subjects stopped taking sulforaphane.

Interestingly, similar improvements in persons with autism have been noted when they are suffering from a fever.  The researchers postulate that this is due to the fever activating the stress response in the body – which causes protective mechanisms to kick into gear at the cellular level.

Simply put, when a healing genetic expression is activated – inflammation and cellular damage is reduced.

A 2014 article published in the journal Antioxidants & Redox Signaling also showed evidence of compounds found in broccoli as well as other foods like onions improved cellular defense mechanisms.

Current research focuses on the protein Nrf2, which is known to enter and exit the cellular nucleus every 129 minutes. When there are health threats, this oscillation increases, raising antioxidant levels.

Sulforaphane as well as quercetin (found in high amounts in onions and apples) increase Nrf2 oscillation to once every 80 minutes.

The Nrf2 oscillation function is a sort of cellular surveillance mechanism that enhances cell health when needed the most. Optimizing this mechanism through compounds like sulforaphane holds the promise of treatments for conditions like autism.

No doubt, time and again, we see the healing power of food working for us.