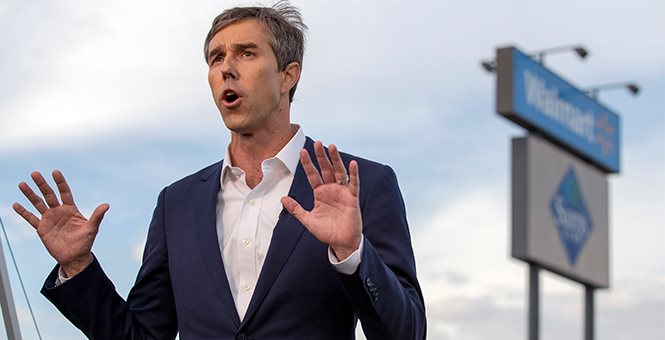 Guns are a big thing in Texas. When Beto O’Rourke was running for the Senate, he had to walk a tight line. He still needed to appeal to his out-of-state donors who generally abhor guns, but he still needed to win votes in the Lone Star State. It’s not an easy way to go and, as we now know, O’Rourke wasn’t successful in his bid. Did he fail to walk that line well enough? It’s hard to say, though I suspect that might have played a role.

Now that he’s running for president, though, he doesn’t need to worry too much about the opinions of Texans. That’s why he’s been on a full-court press against so-called “assault weapons” ever since El Paso.

Last night, Beto once again made his intentions clear by saying “Hell yeah,” he was going to come for our AR-15s.

He then repeated that message on Twitter, which prompted a response.

A Republican state lawmaker from Texas has caused outcry for tweeting “My AR is ready for you Robert Francis” after Democratic presidential candidate Robert Francis “Beto” O’Rourke pledged to ban and confiscate AR-15 military-style rifles.

Within hours, Twitter took down Briscoe Cain’s post, which O’Rourke’s campaign labeled a “death threat”. “It violates our rules for threats of violence,” a company spokesperson said late Thursday night.

This is a death threat, Representative. Clearly, you shouldn’t own an AR-15—and neither should anyone else. pic.twitter.com/jsiZmwjMDs

Earlier, Cain, a 34-year-old “conservative Republican” lawyer who represents a district outside of Houston, Texas, had mocked Twitter users who called his comment a threat of violence. “You’re an idiot,” he told one commenter. When O’Rourke called the tweet a death threat, and said it proved that neither Cain nor anyone else should own an AR-15, Cain responded, “You’re a child, Robert Francis.”

Here’s the thing, though. It wasn’t really a threat.

It was a warning.

O’Rourke continues to labor under this delusion that AR-15 owners will play nicely with him if he were to somehow win and get his way on the issue. He actually thinks we’ll comply. He’s convinced we will.

And when he’s warned that we won’t, he does this.

It’s like him claiming that Meghan McCain was giving people permission to commit violence.

Briscoe Cain is just the latest person to warn him of just what will transpire if the government decides to take people’s guns. We’re not playing around with him. We’re giving him fair warning.

The problem is, Beto is just too freaking stupid to grasp what we’re telling him.

If there’s a saving grace to this, it’s that Beto will never be president. He wouldn’t have qualified for last night’s debate if the DNC was using a less biased method to determine which polls mattered and which didn’t. That means everything he’s slinging around is bluster and little more.

Oh, don’t get me wrong, he means it. He just won’t get the chance to implement any of it.

Should that change, though, he needs to understand that when people start dying, he doesn’t get to pretend he didn’t know this would happen. He’s been warned. They’ve all been warned what will happen if they decide Beto’s idea is a good one and decide to implement it.

Cain is just the latest to do so.