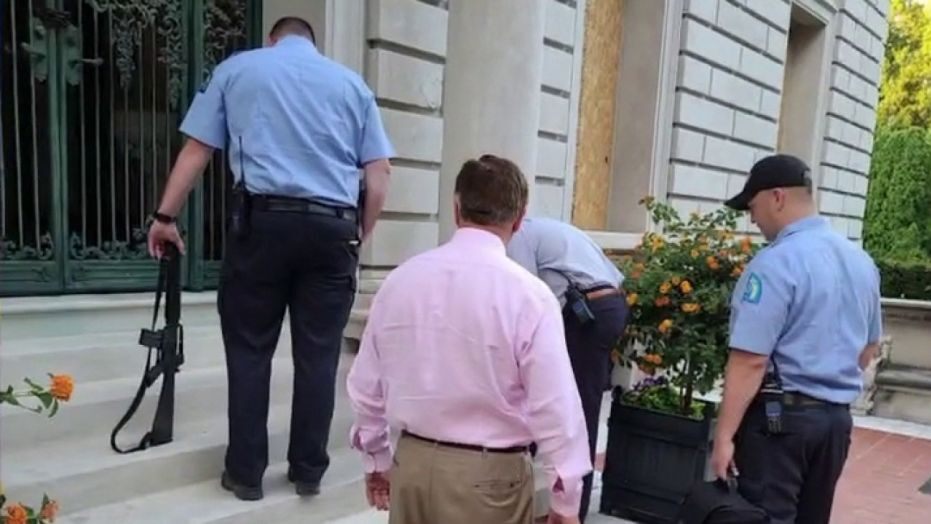 I personally can’t believe that the authorities have taken these people’s guns, and did it on tv, showing that they are now unarmed! The cops showed up with a search warrant! What is going to protect these people now that the clowns that broke their gate and entered their property, know that they are unarmed?

Twelve Republican members of Congress have written to U.S. Attorney General William Barr, arguing in defense of the Second Amendment rights of a Missouri couple whose rifle and handgun are now in the possession of local authorities.

Mark and Patricia McCloskey, who made national headlines in late June when they took up arms to defend their home from protesters who stormed into their gated St. Louis neighborhood, had their rifle seized Friday when local police executed a search warrant.

Then on Saturday, a lawyer — who represented the couple until recently – surrendered to police a handgun that Patricia McCloskey held during the June incident, FOX 2 of St. Louis reported.

Attorney Al Watkins said he had taken possession of the handgun while still representing the couple, in anticipation of using it as evidence in a possible court appearance, FOX 2 reported.

“It was my duty and obligation to make sure that evidence was preserved to maintain the integrity of the defense of Mr. and/or Mrs. McCloskey in the event, in what I believe the highly unlikely event, of any charges being brought,” Watkins said, according to KSDK-TV of St. Louis.

Since the June incident, the McCloskeys have faced scrutiny from the St. Louis Police Department and from the city’s circuit attorney, Kimberly Gardner, who have been investigating the incident – but there was no indication the couple were facing any charges.

In a statement June 29, Gardner wrote that protesters had First Amendment rights that needed to be protected from “intimidation or threat of deadly force,” and said any such behavior would “not be tolerated.”

In their letter to Barr, dated Friday, the dozen Republican lawmakers claimed that any charges filed against the couple would have “a chilling effect” on an American populace whose rights to bear arms are guaranteed in the Second Amendment of the U.S. Constitution.

“At this crucial time in history, our nation needs the Department of Justice to exert strong leadership to ensure that none of our constitutional protections are eroded by mob rule,” the lawmakers wrote in part to Barr. “Charges against this couple will have a chilling effect on the entire nation, sending the message that American citizens no longer have the right to protect themselves at their own homes.”

Saturday’s handover of the pistol occurred outside Watkins’ St. Louis office, in full view of reporters and bystanders, who watched and took photos. Some photos appeared on the website of FOX 2 of St. Louis.

Watkins said he was no longer representing the McCloskeys because his decision to hold the couple’s handgun in his office had made him a potential witness in any court case involving the couple, KSDK reported. The couple’s new lawyer is Joel Schwartz.
Mark and Patricia McCloskey are seen outside their St. Louis home in a clash with protesters, June 28, 2020. (Getty Images)

Mark and Patricia McCloskey are seen outside their St. Louis home in a clash with protesters, June 28, 2020. (Getty Images)

Authorities wanted the handgun in their possession to be sure it was inoperable as the McCloskeys and Watkins have claimed, FOX 2 reported. The reason for the rifle being confiscated on Friday remained unclear.

The protesters claimed they marched past the McCloskeys’ home on the way to a planned gathering outside the home of St. Louis Mayor Lyda Krewson.

Schwartz, the couple’s new lawyer, told KSDK on Friday that he does not believe the McCloskeys will face any charges in connection with the June incident, and said he is trying to arrange a meeting with the office of Gardner, the circuit attorney.

If they do face charges and are convicted, they would likely get probation or be required to perform community service, a law professor at St. Louis University told KSDK.

“There’s very little likelihood that the McCloskeys would see any jail time or prison time on these kind of charges,” Professor John Ammann told the station.
Dom Calicchio is a Senior Editor at FoxNews.com. Reach him at dom.calicchio@foxnews.com.

That is ridiculous, not only are the disarmed, but their chicken shit lawyer has bailed on them too. What a brave man! NOT