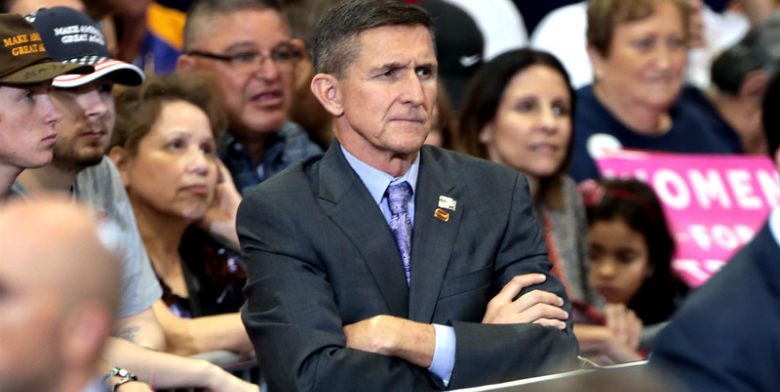 (Everything about the pressure used against him and the interview itself scream miscarriage of justice. )

“Targeted”: Insider Narrative Shows Flynn “Entrapment” Was Same As “Frame”
The insider narrative explains what happened to General Michael Flynn in detail, and how he was tricked and set-up by Obama administration officials in an entrapment scheme that was the “tip of the spear” against President Trump.
by Georgette

Everything about the pressure used against him and the interview itself scream miscarriage of justice.

General Michael Flynn has gotten a raw deal, many people argue. He pled guilty for ‘lying’ to the FBI, during an interview that was “tantamount” to a frame up, according to an insider narrative that was just filed in federal court.

Mueller’s prosecutors threatened to go after Flynn’s son and his business partner in order to get the cooperation for a ‘guilty’ plea, knowing full well that the case against him was feeble and based on entrapment.

The Washington Times reported on Sidney Powell’s outlining of the events, prior to the sentencing hearing that is scheduled for December:

Sidney Powell wrote this story in a letter to Attorney General William P. Barr in June as she was taking over as defense counsel for the former White House national security adviser.

She immediately accused the government of withholding exculpatory evidence that would show prosecutors violated U.S. District Judge Emmet Sullivan’s order. Her motions essentially have been attacks on special counsel Robert Mueller’s probe into Russia election trespassing, though Flynn was convicted of lying to FBI agents on another matter.

Special Assistant U.S. Attorney Brandon L. Van Grack responded this month with an attack on Ms. Powell’s tactics. He said the government owns no such exculpatory, or “Brady,” material and accused her of advocating “conspiracy theories.”

The drama is set to play out at a hearing next month and sentencing in December. Meantime, Ms. Powell won the judge’s permission to reply to Mr. Van Grack with an extended brief that has been filed but not redacted for public viewing.

In his reply, Mr. Van Grack, a veteran of the Mueller team and thus a Powell target, chose to include an attachment: the June 6 Powell letter to Mr. Barr.

In it, she asked Mr. Barr for an internal case review leading to dismissal. She made seven specific requests, such as removing Mr. Van Grack, who remains in place four months later.

Mr. Mueller’s final report said he failed to establish an election conspiracy between the Kremlin and Trump campaign.

“We believe there will be ample justification for the [Justice] Department to follow the precedent of the Ted Stevens case and move to dismiss the prosecution of General Flynn in the interest of justice,” Ms. Powell said.

Judge Sullivan in 2009 threw out the conviction of the former senator from Alaska after discovering the Justice Department had withheld evidence favorable to his defense.

In her letter labeled “confidential,” Ms. Powell made some frank comments about Judge Sullivan, referring to the court hearing that led to a delay in sentencing.

“At the hearing, however, Judge Sullivan launched a tirade, effectively accusing Flynn of working for a foreign power while he was in the White House and committing treason,” Ms. Powell wrote. “Judge Sullivan made clear he intends to send him to prison. Judge Sullivan was completely wrong on the facts of the case, and his rant seems to have come straight from MSNBC comments of the previous night. After a short break in the court proceedings, the Judge returned to the bench and made something of a retraction of his most egregious choice of words. However, severe damage was done. The press ran wild with the treason suggestion unabated for an hour.”

Ms. Powell tried to make the case that the Obama administration targeted Flynn for his running criticisms on the fight against the Islamic State group, the Iran nuclear deal and Hillary Clinton’s handling of Benghazi as secretary of state.

“As more evidence has come to light, it is increasingly apparent that General Flynn was targeted and taken out of the Trump administration for concocted and political purposes,” she said. “We believe there is specific evidence of that fact. He was the tip of the spear aimed at President Trump.”

Flynn’s downfall was abrupt. He conducted several telephone calls with the Russian ambassador during the transition. He urged Russia not to overreact to Obama-imposed sanctions, a response to Moscow’s election interference.

Obama Justice Department officials, briefed on the intercepted calls, began talking up the idea that Flynn violated the never-prosecuted Logan Act of 1799, which forbids private citizens from meddling in foreign affairs.

By the time President Trump took office, the FBI had been investigating his aides for six months to see whether they colluded with the Kremlin. Agent Peter Strzok, who led the probe and expressed a deep dislike of Mr. Trump, went to the White House to interview Flynn. Flynn denied discussing sanctions, setting up his guilty plea to lying.

He pledged to cooperate with the Mueller team. He provided no evidence of a conspiracy despite rampant news media speculation that he had proof against Mr. Trump.

Flynn’s call was leaked to The Washington Post, triggering what would become a battle cry among conservatives: Obama-Clinton loyalists inside a “deep state” were sabotaging the new administration.

Former FBI Director James B. Comey later bragged in public about how he was able to send two agents to the White House without going through the counsel’s office.

“The FBI interview was worse than ‘entrapment,’” Ms. Powell told Mr. Barr. “He was led to believe he was having a casual conversation with friends about a training exercise from a day or two before, when in truth, it was a set-up-tantamount to a ‘frame.’”

“The General was forced to sell his home two years ago to fund his legal defense and still needs a legal defense fund,” she said of the 33-year Army officer, who rose to the pinnacle of his military specialty as director of the Defense Intelligence Agency.

With Flynn under pressure, Mr. Strzok’s biased Trump texts to FBI counsel Lisa Page were about to emerge. Ms. Powell suggested that the Justice Department leaked the news only after it secured Flynn’s guilty plea in December 2017.

“Suddenly, SCO was making extreme threats and placing enormous pressure on General Flynn to enter a guilty plea,” she said. “Sometime after Mueller was notified by the IG of the extremely biased Strzok-Page text messages, Mueller went to [then-Deputy Attorney General Rod] Rosenstein to get authority to target Michael Flynn, Jr. Flynn, Jr., who had a 4-month-old baby, was required to produce his phones and computers. Suddenly, General Flynn was threatened with the public arrest, search of his home, the indictment of his son.”

She said Mr. Van Grack and other Mueller prosecutors “sought every means to put the utmost pressure on him to compel a guilty plea to the point of using threats against his son and manipulated the press to hide the truth in the process.”

Mr. Van Grack told Judge Sullivan this month that none of Ms. Powell’s “Brady” requests had anything to do with Flynn’s lying to FBI agents.

“The defendant predicates much of his request on conspiracy theories, demanding that the government engage in a fishing expedition for documents that could offer support for those theories,” he said. “Irrespective of whether such documents exist, a fact that the government does not concede here, the defendant fails to establish that such information is relevant — let alone favorable and material — in this criminal case.”

Ms. Powell told the judge she wants a letter the British Embassy supposedly delivered to the Obama White House questioning the veracity of Christopher Steele. Mr. Steele is the former British intelligence officer who wrote the now-discredited anti-Trump dossier.

Mr. Van Grack responded: “Not relevant. The government is not aware of information that Christopher Steele provided that is relevant to the defendant’s false statements to the Federal Bureau of Investigation (‘FBI‘) on January 24, 2017, or to his punishment.”

To another Brady request, he said: “Already provided. The government has already provided any information that could reasonably be construed as favorable and material to sentencing.”

Flynn has fulfilled his cooperation agreement with the Mueller team.

In the end, his case didn’t touch on Russian election interference and he did not implicate any Trump person or the president. He lied in his Jan. 24, 2017, FBI White House interview. He made false statements on his Foreign Agent Registration Act form with the Justice Department concerning work for the government of Turkish President Recep Tayyip Erdogan. The prosecution has recommended no jail time.

One thought on ““Targeted”: Insider Narrative Shows Flynn “Entrapment” Was Same As “Frame” what happened to General Michael Flynn how he was tricked and set-up by Obama administration officials in an entrapment scheme that was the “tip of the spear” against President Trump. by Georgette”